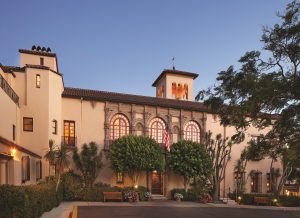 Casa Dorinda is famous the world over for its magnificent architecture and gardens. Less well known is its longstanding, generous support of the many college students in its midst.

Fields of study among 2018 recipients range from nursing to automotive repair. Many of this year’s awardees were honored during a reception at Casa Dorinda on June 12.

“It’s always uplifting to see these wonderful people, many of whom we see and interact with on a daily basis, spread their wings and improve their life choices,” said Scholarship Foundation Honorary Board member Maryan Schall, who has chaired the Casa Dorinda Scholarship Committee since 2016.

The Scholarship Foundation has administered the Casa Dorinda Scholarship Fund since its founding in 1998. In that time, the fund has awarded 621 scholarships totaling more than $1.24 million.

Several employees and their family members have benefited from the separate Casa Dorinda Endowed Scholarship Fund, also established in 1998.

Ever eager to top themselves, Casa Dorinda residents have already exceeded their fundraising goal of $80,000 for the coming year.